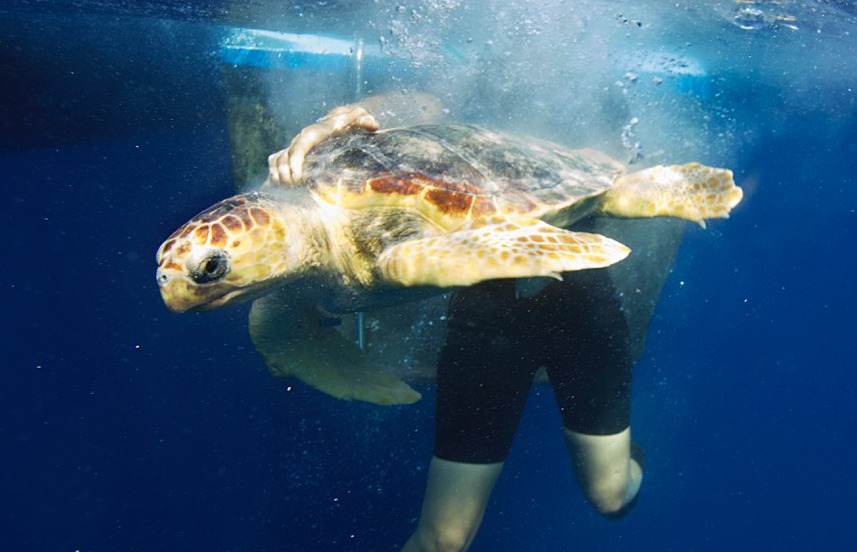 The story of Coxy the turtle

As 3 locals were cruising near the island of Conejera in San Antonio, they spotted something floating. They found a turtle completely tangled up in a plastic net tied to 3 bottle of Coca-Cola written in Arabic , it was nearly moving. After pulling it on the boat they cut off the plastic net and immediately called 112. Although they did this with the best of their intentions they shouldn´t have cut the plastic net, has it can cause serious problems, even death. They should have waited for the experts to decide how to manage the situation. In some cases, when the strangled fin is severe, by cutting off the object that strangles the animal’s body, you might release to the blood a serial of pathogens, and the retained infection (restrained within the limb), spreads and can cause septicemia (blood poisoning), therefore the animal can rapidly die.
The protocol states that anybody that finds an animal with problems should call the free emergency Spanish line 112 and they will manage to contact the corresponding person or organization. In this case as it was a marine animal, they called the environmental agents and the CREM Cap Blanc (the Recovery Center for Marine Species that attend marine animals from Ibiza and Formentera, located in San Antonio).
Then they proceeded to bring the turtle to shore and after the experts stated with an XRAY that it had no fractured bones and only had cuts, Coxy was brought into the CREM Aquarium for recovering.
The Aquarium is a natural cave with constant fresh sea water circulation, offering the perfect conditions for the turtle to recover. It is a very natural environment, she is surrounded by other marine animals such as rays, little sharks and a wide variety of fishes and animals from the Mediterranean, the interaction with other marine animals is really positive in the recovering of the turtle.

What did you decide to do after

The turtle went through a series of treatments and a diet in order to establish her normal weight. Due to the state of her shell (which was covered with algae and cirripedes crustacean) we stated that it must have been adrift a few days, therefore she couldn’t be able to submerge to hunt, so she was starving. It almost lost her frontal fins due to the entanglement with the plastic net.
It has been very positive seeing how the turtle has been recovering slowly, when it first came it was very sad to see how the turtle barely moved. Bit by bit she started eating, swimming and regaining her strength.
After almost a month the turtle is nearly ready to be released back into the sea. We will do so putting Coxy on a speedboat together with the corresponding experts and freeing the turtle behind the island of Conejera where there is a good stream that will help this little beauty (she is just a teenager) into her travel along the sea.

What are the issue facing marine life in Ibiza, and how can we help?

Turtle is one the most beloved animals of the locals, therefore it was generated a great media repercussion, such as newspapers, radio, TV news…
It is heartbreaking to see how these amazing noble creatures are nearly extinct due to our bad habits. Their main diet are jellyfish , due to its similarity with plastics they end up eating it. Almost every studied turtle have ingested some kind of plastic in their lifetime. In fact, our little Coxy has spent the last few days defecating plastics. In many cases turtles sadly died because they try to liberate themselves by eating the plastic in which they were entangled. The plastics accumulate in their bodies and cause blockages in the digestive system, in the majority of cases this leads to death. Just a week before Coxy was found, a dead tiny turtle was found in Es Canar with a tangled mess of plastics in the stomach (and it is not the first one of the summer!).
Trying to get the broadest repercussion of the story, Mr Carl Cox kindly accepted to be the godfather of the turtle, baptizing it with the name COXY. He was moved by the story and said “I´m honored to help out”.
The main objective is to raise awareness that throwing plastic into the sea can be devastating for all sea life but especially for that critically threatened and lovely animal.
After 52 days nursed in the Recovery Center, Coxy gained nearly 4 kg, 21% of her body weight and was back in shape and fully recovered. As she is a wild animal, she wasn’t used to eat dead preys, at the beginning Coxy hesitated to eat dead fish although she loved dead squid, so in order to ensure a diet as closed as possible to the one she would have out in the sea, we had to fool her as if it were a little babygirl, by filling squids with fish. She also loves jellyfish and mussels.
For cientifical purposes an as its established by the worldwide scientific turtle community, we marked Coxy with an internal chip (only readable with an special lector), and an external aluminum mark with serial number, so just in case anyone recatches Coxy, they can communicate with us. We didn’t track her with a GPS as it’s an expensive method and doesn’t last for so long.
We released her back into the sea behind the island of Conejera where she vanished into the deep blue sea, an unforgettable day in Float Your Boat. 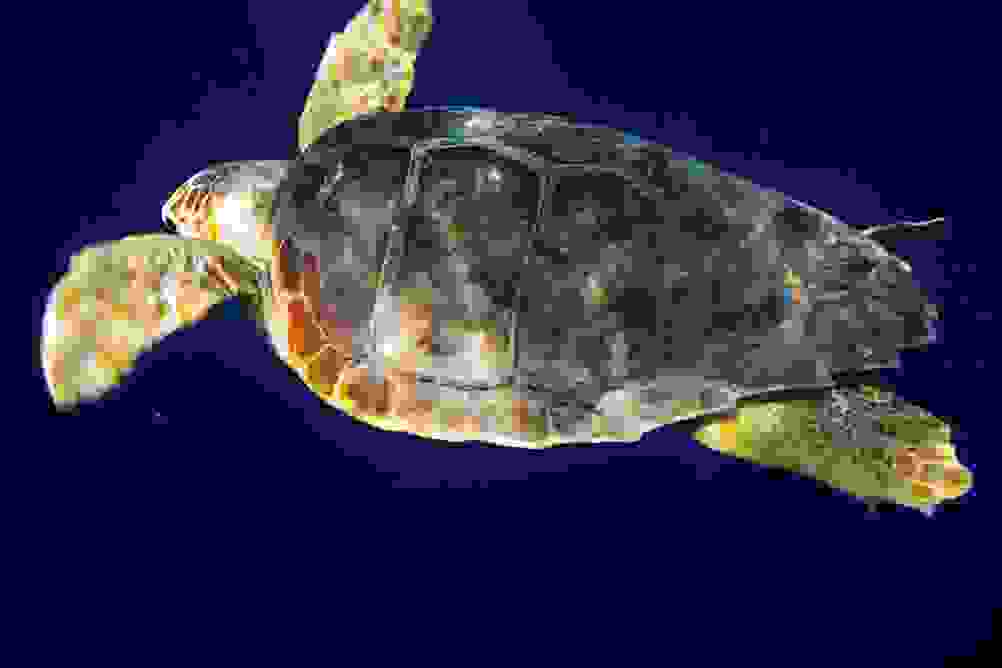 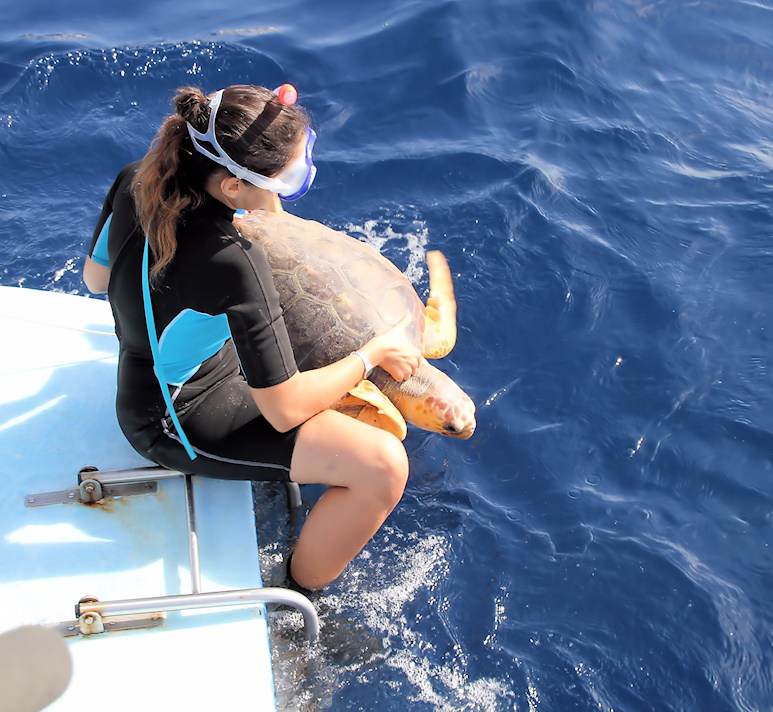