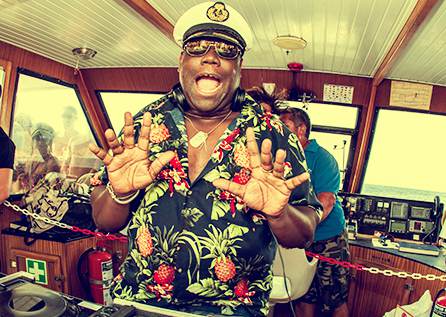 Carl Cox is simply one of the best known DJ’s around the world. He reinvented tech-house through the years, thanks to him today we can enjoy lots of legendary songs.

He was born in Barbados, but he developed his whole career in UK, because of this he could learn all the new sounds that they were proving in this country along decades.

When Carl Cox was 15 he knew that music would be his life, then he used a moving stereo to create his own music. Years after, in 1997 the magazine “DJmag” elected him as the best DJ in the world, this prize was definitive to move him to the glory.

His career has moved along a lot of different styles, he started in the eighties making hardcore-acid house influenced by all the British music style, a new kind of music which tried to reinvent a new sound.

At first, Carl Cox was known as “Three Deck Wizard” because he used three different mixing table in their shows. After the time this DJ has changed his style, but he never lost his foundations: house & techno.

Nowadays, Mr COX mix music in the main festivals in Europe and he is the main DJ in all the big parties in Ibiza´s summer.

Carl Cox is a successful producer as well. His label “Intec Records” try to find new underground talents around the world.

Actually Ibiza summer parties has no sense without this DJ. He has been 14 years working in Space Ibiza as resident, something that nobody got. Carl Cox has worked as Deejay , producer, musical director and organizer in these parties, a global show with him as starring.

Because of its influence and trajectory, for “Float Your Boat Ibiza” it’s an honour to count on him as one of our DJ partners, a legend of tech-house and a legend in Ibiza that you can enjoy in our parties on board.