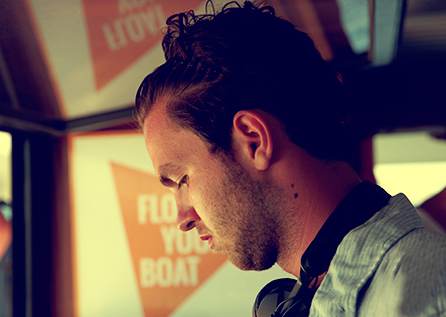 This DJ started his career in electronic music making house and knowing that he will be someone important in this business. His main influence is “Just Be”, it’s not only about style, he is also his father. Apart this mythical DJ that you can also enjoy with us in “Float Your Boat”, artists like Mr C was very important to develop his style.

Oliver Moon started to make music very young, he had the inspiration and now everybody can enjoy his creations. The End has been a very important club in London, he was one of the youngest DJ’s in this club and some important festivals around Great Britain. Parties like Shake It! organized by Layo & Just Be threw him to the fame. He discovered finally Acid House finding finally his own sound.

As many others, this DJ was working in dark raves and after parties, something that can seem negative, but in most of the cases is very useful when you have to guess what they are expecting at 9 o’clock in the morning.

His debut in a big club was in Leeds, in “The Garage”, from that session he was getting experience and maturity. Some months later he made a decision, he would change his residence from England to Ibiza, at least during the summer.

His way in Ibiza started in private parties, some of them working with important labels as Cafe Mambo. These kind of little parties allowed him to taste the authentic Ibizan style.

As many British DJ’s, little by little he was discovering White Island’s style, a typical way of doing British electro that here, in Ibiza, we love. Denney, Guti, N. Moudaber, Casy and others supported him in this moment.

Different styles of beat as multi-percussionist and a sound which is constantly increasing keep Oliver Moon being different, if you want to say in a couple of years: “I was in a private party with Oliver Moon”, just book your tickets with “Float Your Boat” and join us.