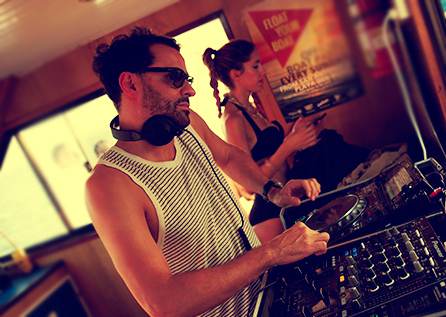 Yousef has been one of the most acclaimed dance DJ’s since the end of last century. His main characteristic is that he is always looking for and finding new sounds.

Yousef and his music are the best example of the new DJ and his new music, an actual vision of this business thought as a global thing, an art. Yousef is more than a DJ, he is a producer, mixer, label owner, event organiser and mentor for new talented musicians.

Yousef has something that not all Dj’s can get, he mix all the old house style with the energy of techno, O.K. everybody does it, but the result is spectacular, just nobody does it like him.

This DJ achieves the same result in front of a few people than in a massive session in Ibiza, the whole world had the honour to receive him.

Carl Cox, Sven Vath, Jamiroquai, Moby, Moloko… are just a few of artist that has been remixed by Yousef. In 2014 he produced music for 2014 FIFA World Cup Album with his label “Circus Recording”, this label is building a huge platform of new talented faces, all of them around Yousef.

In 2012 Yousef released “A Product of Your Environment”, his second album, this work had amazing reviews and got a lot of prizes like Ibiza Voice’s album of the year. His 3rd artist album served him to review 15 years of his own music.

Authentic house and sounds of all the corners in the world builds a very particular sound, there is not another DJ like Yousef, passionate vocals and Chicago rhythms that everybody wants to dance.

Yousef makes a different contribution to electronic house, and we have this gift for you in “Float Your Boat”, you can enjoy him and his music in one of our party boats, just join us in Ibiza.