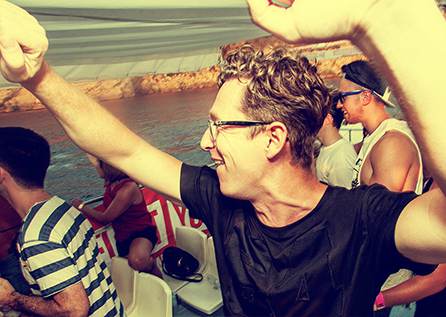 Some DJ’s knew how would be their lives, some of them played some instruments when they were 6 years old, some other grew up being in families full of musicians, a lot of artists spent their youth clubbing and going to raves, Sean Hughes just knew one simple thing: he wanted to make everybody dance. Sean Hughes just do two things: he plays and he mixes, but he does it very well.

This DJ can make music with a vinyl, with an USB, with a computer, they could create music even with a stone, and he does it in a small party for house fans like in a club with thousands of people waiting anxiously for him.

He uses soul, disco, house, drum and bass, and indie all together, the result is perfect, just one particular sound entering your body. Cool sound for everybody, O.K., all of us we have that friend who never dances, take him to one session with Sean Hughes and he will dance.

Just in 2013 he played in collaboration with Justin Timberlake in Cannes Film Festival, played in club “Torch” in the exclusive beach front club and he played for more than 15.000 people on Creamfields South Stage.

He has his own residence in Ibiza, but before this he was playing in White Island, the main place for all the British DJ’s. In here you can see him in Cream Ibiza and Cafe del Mar, in this club he has a record: he was the first who kept the doors opened until 6 a.m. a magic night for everybody.

In his own words, he plays “whatever seems right for the situation”, that’s what true DJ’s do, just give to his public something to dance, something to feel a special moment.

Sean Hughes is part of our team, if you want to join us in a magical session just book your tickets for this season with “Float Your Boat”, enjoy Ibiza with us.