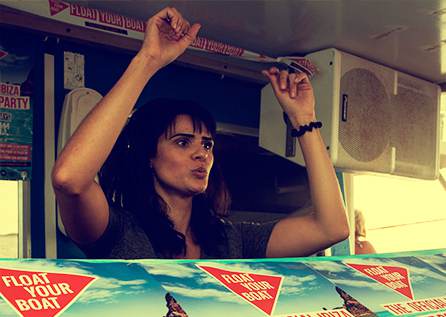 There are not many women in tech house so influential as Anna Miranda, not only in Brazil, but in the whole world. She knew that music will be her life when she was very young, mixing music is a natural thing for her, as a teenager she started to mix and speak about other mixers. It’s not easy grow up in the Brazilian DJ ambient, in this country there are cents of good DJs and a main part in Brazilian culture is the music, so become a good musician is not difficult, but become a celebrity is half impossible.

When she was 13 she stopped in tech house, a style of house music that was starting to be popular, a lot of mixers was approaching to this beat and suddenly, people around the world started to pay attention to these DJs, Anna Miranda just fell in love with this music.

Lots of labels asked for her when she was a teenager yet, finally she signed with Tronic, Kraftek and Turbo Recordings, for all of them this was a complete success. “Let me take you” was one of her firsts epic tracks, after this “Six figures” and “Can’t sleep” confirming Anna in the main positions of tech house panorama. One of the most valuable partner along these years for her has been BBC Radio 1, always playing his tunes and supporting her.

In 2014 he travelled around the world in a tour along countries like France, Dubai, Spain, South Africa, U.K., India, Mexico, Dominican Republic, Germany and much more, something to confirm her international influence.

When you see her in live you can feel all the energy of this Brazilian mixer and her exceptional technical ability, that’s why she has a real army of fans in Brazil and around the world. Anna Miranda is in our Ibiza party this summer, and she is with us in “Float Your Boat”, come with us t our Ibiza boat party and try something different, the energy and passion of this Brazilian DJ, book your tickets now and join us! Dj Plastik, Carl Cox and other Dj’s are already here.