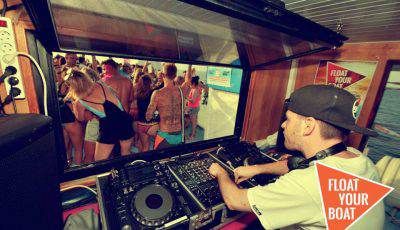 DJ SKT is without question one of the hottest talents in the UK club scene. The man behind 2015’s huge ‘Take Me Away’ as well as countless other club anthems, DJ S.K.T is one of the hardest working producers and most in-demand DJs around, and with a new weekly residency on Kiss FM can now count tastemakers such as Annie Mac, Pete Tong, Danny Howard, Mistajam, DJ Target, MK, Roger Sanchez, Amine Edge & Dance and Idris Elba among his legions of fans.

A producer, DJ, and label manager, DJ S.K.T specializes in all forms of dance music – from deep and soulful house, garage & experimental bass, all tied together with a common thread of working a dance floor.

A UK radio favourite, S.K.T has delivered guest mixes for Kiss FM UK, Capital Xtra, Rinse FM and was resident DJ on BBC 1Xtra Talent’s UKG show in March 2014 and was one of Mistajam’s 60 Minute Mix DJs on BBC 1Xtra, charged with delivering two mixes per month on this primetime show.

His first significant productions came at the tail end 2013 with remixes of Miguel’s ‘Adorn’ & Somore’s ‘I Refuse’, while 2014 saw him produce the underground anthem ‘Right Before My Eyes’ for Little Nikki on Sony/Deconstruction which gained him a Top 40 in the UK national singles chart. Following these early successes, his remix of Nightcrawlers’ seminal ‘Push The Feeling On’ was signed to Ministry Of Sound.

Further show-stealing remixes for the likes of Oliver Heldens (‘Gecko’), Wilkinson (‘Dirty Love’), Becky Hill (‘Caution To The Wind’), Clean Bandit & Jess Glynne (‘Real Love’) and recent UK No.1 Philip George’s ‘Wish You Were Mine’ set DJ S.K.T in a league of his own, bringing his unique sound to thousands of new fans around the world and establishing him as a remixes of real renown.

However, it is for an original production for which DJ SKT is arguably best known. The huge ‘Take Me Away’ with guest vocals from Rae – after initially being signed to house titans Defected/Azul – was snapped up for major release by Atlantic Records, eventually breaking into the top 20 of the UK Singles chart. This was followed by a return to his underground club roots with the ‘Dirty EP’ on Defected, which was heavily supported by the likes of Hannah Wants, Sonny Fodera, Tensnake, Pete Tong and B Traits.

Outside of the studio DJ SKT has performed extensively across the UK and in Europe this year and appeared on line ups with tastemakers including Hannah Wants, Todd Terry, Zinc, Cause & Affect, DJ Fresh, Gorgon City, MK, Amine Edge, MAW and more. 2016’s gig schedule is busier than ever, with upcoming appearances at Cream (Ibiza), We Are FSTVL, Sankeys Manchester, Creamfields and Sundown Festival just some of the highlights over the coming months.

With releases lined up across some of the most credible labels in the game and his new radio show on Kiss FM UK going from strength to strength (Wednesday night/Thursday mornings at 1am weekly) DJ S.K.T ‘s star looks set to continue to rise indefinitely.