Ibiza is a great place to be and this has been true throughout history. It was very much in demand with wars and invasions seeing it change hands and names through the ages.

From the medieval castle and cathedral to archaeological sites and museums, there are plenty of places to visit and see the influence of these past civilizations.

The Phonecians and Carthaginians

The Phonecians were the first to settle on the island in the 8th Century BC at Sa Caleta. The remains of stone buildings at this site were excavated in the 1980s and 90s and is now a protected area and can be visited on the red cliffs overlooking the beach.

They later moved west and founded Ibiza Town under the name Ibossim in dedication to Bes (an Egyptian deity associated with music, dance and sexual pleasure). Bes wasn’t the only god they worshiped as a shrine to Tanit, a symbol of fertility, was also found in the caves of Es Cuieram.

During this time the Phonecians and Ibiza fell under the control of Carthage (located in the area of modern Tunisia). From the 5th Century BC, they began to exploit the natural salt marshes for the production of salt which continues today at Las Salinas.

The Romans referred to The Carthaginians as The Punic people and looked to assert their dominance over them. After the second Punic War, they succeeded in conquering the Balearic Islands in 123 BC. Then named “Ebuses”, the Punic language remained and agriculture and commerce continued to thrive.

After the fall of the of the Western Roman Empire in the 9th Century AD, Ibiza spent brief periods under the control of first The Vandal (Germanic People from modern day Poland area) then Byzantine rule (capital city was Byzantium, modern Istanbul) followed by some time with no record of any formal governance.

Ibiza emerged from the dark ages with the arrival of the Moors in 902 AD. Now under the rule of the Taifa of Dénia, the Islamic Moorish kingdom in medieval Spain, Ibiza had another yet another name change to Yabisah. The few remaining locals converted to Islam and Berber and Arab settlers came in.

Enhancements in agriculture, irrigation, and watermills were made during this time and a great example of these can be found in the lush valley of Es Broll, just 5km from San Antonio, where a network of mills and tunnels distribute water to the terraced fields.

Despite an invasion by Norwegian King Sigurd I as part of a crusade in 1110, the Moors remained for over 300 years.

Ibiza emerged from the dark ages with the arrival of the Moors in 902 AD. Now under the rule of the Taifa of Dénia, the Islamic Moorish

The Aragonese King, James I, invaded in 1235 and the Catalans managed to take control of the Dalt Vila strong hold by taking advantage of a secret entrance at Calle de San Ciriaco. The local Muslim population were deported and the mosque was destroyed with the Cathedral being built in its place.

With additions to Dalt Vila’s defense having been made by each of its previous occupiers, Kings Charles I and Philip II of Spain added its final piece. They contracted Italian engineer Giovanni Batista Calvi to construct the the defensive walls in the 16th Century to defend against the French, the Ottomans and pirate attacks.

Over the centuries of Catalan rule, the island was often neglected by the mainland and brutal attacks by pirates were frequent. Churches were heavily fortified by locals to take refuge from attacks and defensive towers were built as a warning system.

Gradually the islanders learned to deal with the attacks with Ibiza’s privateers, Corsarios, defending the island from pirates from their own boats. There is a monument to their bravery by the port of Ibiza. 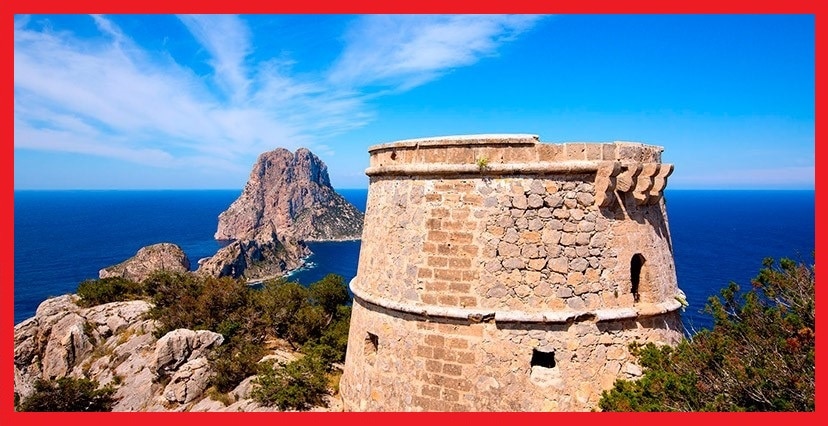 The Beginning of Tourism

In modern times, Ibiza had had become an isolated community relying on agriculture and salt but the introduction of regular ferries from the mainland in the 1930s changed the Island’s fortunes. The spread of fascism in Europe also attracted a number of artists, writers and hippies to the island. Over the years that followed, these free spirits helped to transform Ibiza in to an international tourist destination.